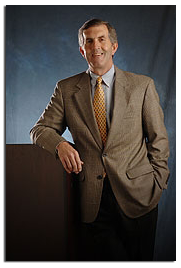 David E. Shipley joined the Georgia Law faculty as dean and professor of law in July 1998. He led the school through the completion of a strategic planning process, a $3.2 million renovation of several classrooms and the law library’s Carl E. Sanders Reading Room, a school-wide technology upgrade, the creation of the director of advocacy position, the establishment of a new clinic, and the successful passage of an ABA site inspection. Also, under his leadership, there was a steady improvement of incoming student credentials. He resigned as dean in June 2003 to return to teaching full time. In 2012, he was awarded the Georgia Athletic Association Professorship in Law.

Shipley has been teaching courses on civil procedure, copyright, administrative law and remedies since returning to the classroom. He also helped establish the law school’s semester abroad program at England’s historic Oxford University. Established in 2006, Shipley served as the program’s professor in residence at Oxford in 2007, teaching international intellectual property and comparative administrative law to 20 law students.

In 2010, he was named the UGA Faculty Athletics Representative to the NCAA and the Southeastern Conference (SEC). His responsibilities include working with the Athletic Association to support the academic progress and success of UGA’s student-athletes, serving as secretary to the Athletic Association’s board of directors and helping monitor compliance with NCAA rules and regulations.

Shipley is a co-author of the casebook Copyright Law: Cases and Materials (with Sheldon Halpern and Howard Abram, 1992) and two editions of the treatise and practice manual South Carolina Administrative Law (2d ed., 1989). He also writes and speaks frequently on issues regarding copyright, intellectual property, administrative law and legal education at seminars and conferences in Georgia and across the country.

Shipley is an active member of the American Bar Association and the Association of American Law Schools. He has also chaired and served on many ABA accreditation inspections.

Shipley enjoys working in his yard, trying to break 100 with consistency in golf, running, swimming and spending time with his family.

Visit him at Rankin Smith Wednesday mornings from 9-11:30 A.M.

No events are planned at this time.